Bingo, Salsa, and Rum for Charity

“We are not a religious group, a charitable organization, or a company; we are just a group of neighbors here together to support a good cause”

That idea really stuck out as an old Colombian man introduced the event in front of the eager crowd of bingo players’ already one glass deep in rum. The background to this story goes that every year there’s a neighborhood in Medellin, Colombia, that holds a charity bingo night at a local theater to raise money for poor people. The girl I am dating invited me to this year’s event with her brother, cousins, and some family friends. The event was proper, catered event with lots of families in attendance.

With a glass full of dark rum and ice in hand, and not Aguardiente for a change, the heckling began as the start of the first game approached. The people who had actually arrived on time didn’t want to wait for the latecomers. The host, a frail gray-haired man, held out as long as he could before giving into the crowd of families wanting to get their Bingo on. I considered bringing my camera. But in situations when I’m not actually a tourist anymore it doesn’t feel comfortable snapping photos of people I don’t really know just so I can paint a better picture of the night for you guys. I don’t think that really makes complete sense but I have never felt comfortable taking photos. In fact I just took my first photo the other day after living here in Medellin for almost three weeks now.

Back on topic, the Bingo game started when the host announced G for Gato treinta y tres .  One for me!

At this point the group I was with quickly tried explaining me how the game of Bingo works, assuming Gringos everywhere don’t play. I played the dumb gringo role even though my country invented the game! Somewhat satisfied that I understood they focused their attention to their handmade leather bingo boards. But my friends habitually glanced at my board making sure I could keep up with the pace. After years of high school Spanish classes I have the numbers down but it’s almost like they considered my board theirs, just as excited when a number on my board was called.

In the meantime we continued to talk amongst our table. We had actually gone to dinner with her cousins about six or seven months ago the last time I was in Medellin. It was mutually exciting to see each other again. Her cousins are very close and last time I met them we got along really well.

The first bingo game culminated in a middle-aged woman shouting Bingo which meant shouts of disappointment.  My friends pointed out this woman wins every single year! For a US$300 prize I wish it were me who had won! Though honestly I felt nervous about winning. I could imagine shouting Bingo to see a crowd of people staring at me, thinking, who the hell is this gringo that stole our prize!

Just like many Colombian events the DJ started up playing lots of catchy songs while the available space on dance floor shrank. I watched as the tables emptied. I casually scanned the room of smirking faces experiencing the rare but profound sense of transcendent happiness combined with an overwhelming sense of contentment. At that moment I confirmed that my temporary move to Medellin was the best thing I could have done for myself.

While I reflected I noticed a hand approach my face. It was change of pace in the music to the basic and slow meringue.  Without hesitation I joined her and we danced for a few songs. 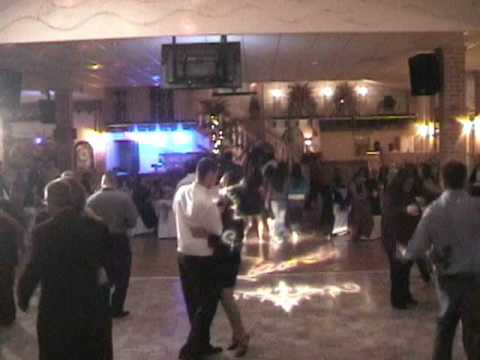 The dancing slowed down even more until the second game of Bingo started up again. Then the floor emptied and people anxiously awaited the calling of the next number. At this point I should mentioned that people at the table would occasional ask if I were having a good time. It’s a legit question. Bingo on a Saturday night? I was having a great time but I think they found that hard to believe. They did their best to include me in the conversations and dancing. I felt welcomed as always whenever I am in Colombia.

Fast forward to a break in the game for a few minutes. A few of us walked around a bit and I spotted someone very familiar…could it really be? Robin Williams!

Not really. But this Colombian man looked so similar to him that when I pointed him out to others they all agreed. I only wish I had my camera with me.

Since it became an extended Bingo break the DJ started again. A small dance circle formed with me in the middle busting moves for a few ridiculous moments. But the next dancer, a chubby old lady out-shined me. But our table was proud that I tried.

I tried to sit down after that but one older woman at the table motioned to dance a faster salsa tune with me. By the way, you must listen to this famous Colombian Salsa song. It is really the best.

I have to mention I started taking private salsa lessons since I have been here but none of my two lessons helped. I danced the gringo way but sure did move my feet – everywhere. I enjoyed it too.

Then came the Macarena so I sat down. But it was a good thing I did because I could then watch the girl I am dating and four other little girls dance to the staple Colombian hits that have their own unique choreographed dances like the Macarena.

After some time Bingo continued and then ended soon after. None of did ever win but night was a huge success. Not just for the charitable aspect of the event but I know that everyone at our table, including myself, danced, laughed, and bonded.