I always figured I would get more of a reaction when it comes up in conversation that I have been to Colombia. Either people must not know anything about it or must not find it interesting at all. I'd like to introduce a little of what Colombia has to offer so when I return this summer more people will be interested in hearing about my travels there since its really an incredibly diverse and interesting place!

Bienvenidos a Colombia! A place filled with the friendliest people, most beautiful women, interesting cities and small towns…ect. I traveled solo to Colombia from July through August this past summer. Colombia is mostly known for the violence and drugs, which i far from the truth to anyone who has visited.

Instead, I encountered a country with beautiful and friendly people, colorful and interesting cities, small colonial towns, laid back beach towns, and a bunch of friendly travelers. I have traveled a bit and Colombia has been my favorite country so far.

My first stop was Bogota

I flew from Quito,Ecuador to Bogotá in a few hours. Even though every traveler i encountered in Ecuador claimed that Colombia was pretty safe, I could not help but feel apprehensive stepping out of the airport. The taxi driver who took me to my hotel did not help either. First he claimed that my hostel (the most famous in Colombia) did not exist. After i demanded he take me there anyways, he ended up dropping me off about 15 city blocks from my hostel at 6 pm with all of my bags. I ended up walking for an hour (hard to see the street signs), until a few military officers escorted me to my hostel. 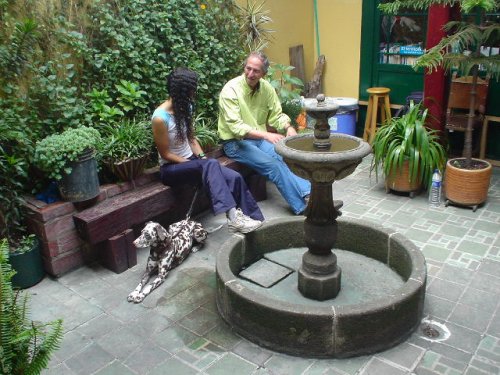 I explored Bogota by foot for the next few days.

Plaza Bolivar (it seems like there is one in every city)

Cerro De Monserrate, a great lookout point with a church, market, and restaurants at the top.

The market at the top

La Candelaria is the most historic & colonial part of Bogotá. All of its houses are bright colors, its streets narrow, some cobblestone, each place with its own unique door.
There are lots of educational institutions in that part, meaning lots of young people in the area and it's full of people. There are also theatres and quaint little restaurants in the area, check out some shows, they are part of Colombian culture.

This was a checkpoint where the military would check all bags before allowing people through. It also contains the presidential palace and other government buildings. I was not allowed to take pictures inside this checkpoint.

Next up was Santa Marta

I went from a really cold Bogotá to Santa Marta, which is probably the hottest and most humid place I have ever been. I explored the city at night with a Colombian guy i met at the hostel. His parents were kidnapped and killed by the guerrillas. There was some huge Christian holiday festival on the beach with live music and lots of drinking. I don't have any pictures from that night but here is a picture of Santa Marta.

Also nearby Santa Marta is Parque Tayrona. I did not go there but it is supposed to have some of the best beaches in the world.

I went to Taganga the following day on a collectivo (shared minivan) to meet a few friends from Ecuador. Taganga is strange because it is a small town with little to do and below average beaches. However, it's a favorite for many people as its just so relaxing for some reason. It's hard to get bored watching beautiful women walk on the beach. I would easily lay on the beach and just watch for hours.

This guy loved to sing about Taganga

I forget what this thing is called, but i loved it!

Next up was Cartagena, located on Colombia's northern coast and facing the Caribbean Sea, is the most visited city in the country by tourists. The city is famous for the walled colonial city ("ciudad amurallada"), which is truly amazing and has many fancy restaurants, clubs and hotels; and a long strip of hotel towers and condos fronting onto the beach, known as Bocagrande.

A part of the wall

A view from the wall

Castillo de San Felipe, a fortress built in 1657 by the Spanish for protection against pirates while shipping gold out to Europe.

Views from the fort

I took a day trip from Cartagena to a mud volcano which was pretty cool.

I took a long (10+ hours) nightbus from Cartagena to Medellin (now made famous from Entourage). Throughout the 1980s and 1990s, Medellin was considered one of the most dangerous cities in the world for its size, and had a highly disproportional homicide and kidnapping rate. It was the home of the drug lord Pablo Escobar and the so-called Medellín Cartel, who virtually took over the city in the late 1980's and early 1990's. Now, Medellin is one of the most safest and modern cities in Latin America.

I happened to be there for Feria De Flores, the most important social event for the city and features the Silleteros Parade, a pageant, automobiles, a Paso Fino horse parade and many concerts.

A homeless guy outside of my hostel

I met a girl at one of the concerts and we hung out for the next four days with their friends. Here is one of the malls they took me to

Subway Station (except the subway is above the ground, like a monorail)

Public art must be built whenever a new building is built. The result is this…

I went back to Bogota to party some more after Medellin. I also took up on a sunday morning to hit up some of the smaller towns.

I first went to Villa De Leyva, a charming old colonial city in Boyaca in Colombia. Villa de Leyva is one of the few towns in Colombia that conserved all its colonial architecture.

The next morning I took a bus to Barichara (had to transfer in Tunya first). Barichara was like Villa De Leyva, except it was hotter.

I went to San Gil the next day, which is the adventure capital of Colombia. I was able to choose from white water rafting, bungee jumping, paragliding, rapelling down waterfalls, ect. San Gil is also pretty tropical.

I later made my way back to Bogotá for some more partying. I could not get myself to leave, so had to bus it down to Cali where I was to fly back to Ecuador the next morning. I had such a great time in Colombia, with so many stories to tell.