Now safely in Colombia for the 5th time since 2007 immediately did the first thing most exciting to me at that moment. I slept.

As I woke up later still in time to catch some daylight I continued my day-1 Bogota routine. This routine consists of first walking to Crepes y Waffles which while just a chain restaurant, is absolutely delicious.

It's probably best known for the presentation of its deserts. 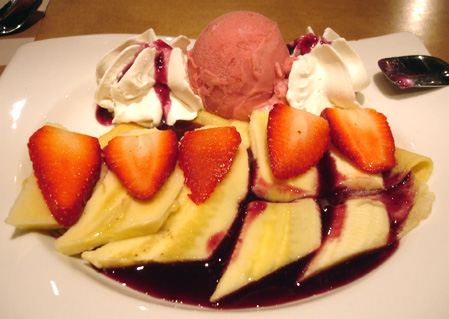 First part of the routine interrupted

Next part is a stop at Juan Valdez around 10 blocks away past the colonial buildings of downtown Bogota. No matter how many times I do this walk I never bore.

So once at Juan Valdez i'll buy a large tinto (word for plain coffee) in this exact location where I sit outside and just stare dumbfounded that I am back in probably my favorite city in the world.

I then continue walking the streets until I reach Plaza Bolivar where I take a seat on the large steps amazed that each new time I visit the plaza has been decorated different. This time with ants wtf?

I finally end my stroll around downtown as it becomes dark and make my way back to hostel sue where I am greeted by the staff calling out my name.