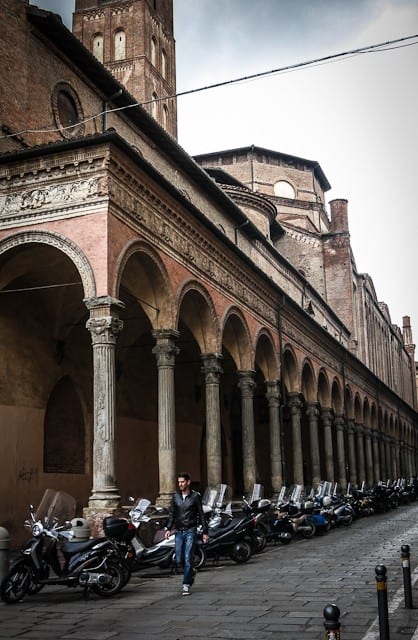 Of all of my adventures, travel by train in Italy

has been one of my favorites. I recently traveled by Italian train around the Emilia Romagna region of Northern Italy.
The first stop of my trip was to Bologna. This is a place I have had on my “must see” list for some time now, so to be able to check off one more destination felt pretty amazing. I visited the University of Bologna, San Petronio Bascilica and the Due Torri towers of Bologna.

I could not believe the sheer size of San Petronio Bascilica. Throughout my travels I have visited a few other Italian churches, but this one is by far the largest I have seen and its history is fascinating.

From Bologna, I hopped back on the trenitalia

and headed to Ferrera which is surrounded by six miles of wall left over from Renaissance times. In Ferrera I ate some of the most amazing Italian food and met a group of Italians who befriended me and agreed to show me around. They were the nicest people and took me to all the best historical sites.

We went to the Ferrara Cathedral in the city center and I must have taken five hundred photos. And that was just of the outside of the church. It was one of the most ornate cathedrals I have visited. The inside was just as grand and was completely redone in the 18th century after it was heavily damaged in a fire.

The third and final stop on the router

was Rimini, which sits on the coast of the Adriatic Sea. The views from Rimini were phenomenal. After so much historical site seeing over the past few days, it was amazing to have some time to sit on the beach and soak in the scenery.
Traveling by train has been one of my favorite modes of transportation. Even though I only made three official stops in Emilia Romagna, I feel like I got to see so much of Northern Italy. I brought along several books to read on the train, but I ended up looking out the window at the scenery most of the time.