Hammocks on the Beach

In June of 2008 my Dad traveled to Cartagena, Colombia to spend a week with me. We took a boat to a tropical beach with clear blue water, crystal white sand, and swaying palm trees. But the sun’s rays felt like a torturous death and the nagging vendors even worse.

One clam salesman even offered to trade his worn out khaki shorts with a big hole in the crotch for my bathing soon. This scene changed drastically as the sun set.

It was beautiful, especially when the vendors packed up their worthless goods for the day and hiked through dense jungle vegetation to return home and the tourists boarded boats to return to the city.

My dad and I stayed behind. We rented 2 comfortable looking hammocks for $10 and bought tuna fish and crackers for dinner. With our hammocks set up and not a soul left on the beach we finished watching the sun set until all we could see were the glowing moon and stars. It was perfect. 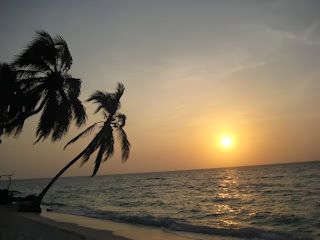 The flies rushed out and attacked. All. Night. Long. There was nowhere to go. It was the type of attack where you try to hide any exposed area of skin. That meant tucking my flaking, sunburnt arms into my t-shirt and praying for mercy.

I fell asleep. Not for long. I awoke to the sound of cows mooing. I thought we were alone. But out of nowhere, a herd of cows moved slowly along the beach. We both agreed it was a strange sight. The cows were just as surprised to see us. They thought they had the beach to themselves too.

I brushed this incidence as just another of the many that happen while traveling and feel back asleep.

He pointed to the patch on his stomach. I noticed that he was wearing camouflage and then it all made sense. He is a military officer. When he repeated his question again I understood. He wanted to tell me that he would be setting up his hammock next to ours for the night.

We smiled and returned to our hammocks. I waited for a third incidence stranger than the first two but all I got was more bug bites and then fortunately, some uninterrupted sleep.