In a backpacking culture where the most time a traveler will spend in one place is rarely more than 1 week, I became a veteran backpacker of Rio entering my second week. But during my third week I became an expert. Almost a native.

No, I do not take myself and what I just said to seriously but really, in El Misti hostel, I quickly became a longtimer and the resident tour guide.

“Jason, which bus do we take to get to Christ the Redeemer?”

“Hey, Is it safe to bring a camera out tonight?”

“Is it safe going on our own to the football game or should we go with the tour company?”

On this Sunday night I did the unthinkable. I led a group of 12 tourists into a favela to go to a big funk party in the favela.

To give some perspective, tourists pay a tour company over $50 for this service.

Remember, favelas are shanty towns with their own government ruled by gangsters.

Police rarely venture inside them . The only time they do is with their guns blazing. It is a place where the residents have so little they resort to stealing electricity by plugging in their own wires as seen in this photo.

I, a 5’6 under 140 lb. foreigner speaking no Portuguese organized everything and lead a group of 12 other gringos into a place that one would think we clearly do not belong.

“Let’s go guys. Follow me”, I said as I hailed three taxis off the street next to our hostel.

I confidently shouted (in Spanish) “Vamos a Castela Das Pedras en Rio De Pedras” to the first driver. He nodded that he understood.

“Usas el taxi metro, ok?” After hearing another half nod si, I push 4 from our group into the taxi while handing one of the guys a piece of paper with the name of where we are going, just in case. 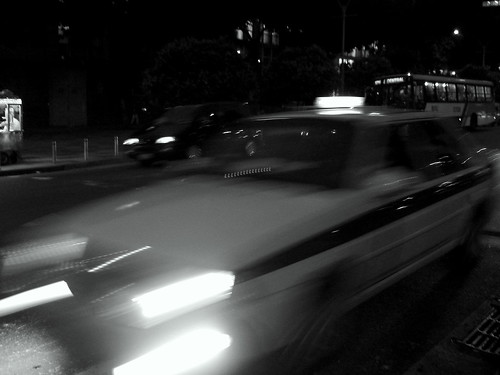 I moved along to the next taxi repeating the same thing and shoved another four into the taxi.

The 5 of us left consisted of 4 mostly attractive 23 year old women from London who made me promise to be in their taxi! The four of them just graduated from law school and are vacationing in Rio for a few weeks before starting their careers. On paper, these law school graduates must seem like they have a good head on their shoulders. The exact opposite is true. The four of them are the really girly type that take a few hours to get ready, expect people to fulfill their every need…almost as if they are queens.

“Jason, are you sure its going to be safe there.”

“It’s actually quite dangerous there. The other week I saw a fight between these two girls fighting over this guy and the one girl shot the other in the face.”

Over the past 3 months I learned that sarcasm and teasing is the only way to deal with girls like this.

The taxi driver was a hell of guy and I really enjoyed our conversation and how well it flowed despite him speaking Portuguese and me speaking Spanish. He didn’t give us any bullshit like not using the meter or asking for additional money like past drivers. Instead, he told me all about Rio and that he works as a police officer during the day, driving taxis at night.

This is his first time driving to this particular favela and he can not understand for the life of him why a bunch of gringos want to party in a favela. Clearly this man has never been!

As I continue to speak with this driver I am constantly hounded my the girls squished together in the back. Although I kind of wish I was back there squished between the four of them, I do my best to ignore their worrisome questions and comments.

“Are you sure we won’t get killed here”

“What is the driver saying about us?”

Soon enough we approached the favela and the surroundings became more familiar. This is also when all three of our taxis realized they are lost and so we pulled over a few times to inquire about the location of the warehouse we want to party at. The fear in eyes of these four girls is priceless.

We reach the place and I gather the 13 of us together and explain whats going on next.

“Listen, girls are getting in free so you guys should go wait in line over there. We (the guys) need to go buy tickets and then wait in the guys line. We will all meet up in the front once we get inside. Ready? Break on three! ONE!”

And that is when I quickly pulled the guys aside and told them to watch the girls’ frightened faces!

We are there early and not much is doing yet inside. I point towards the drink ticket vendor and tell the guys we ought to purchase the drink tickets now because we if we wait any longer it will be a 30 minute wait in line.

The line moves quickly and I purchase 5 drink tickets at about $1 each. We maneuver our way to the bar and spot the girls. They are hounded by men, both with and without shirts. Clearly, they love the attention.

All of a sudden the sparklers catch everyone’s attention, creating a fog that makes it nearly impossible to see 5 feet in front. At the same moment the DJ blasts the music even louder playing a series of catchy dance songs.

I go wild. I rip off my shirt, grab the closest girl, and show off my newly learned dance moves. Kidding. But in reality the bunch of us do go crazy and for the next 10 minutes one would look at us and assume we had just taken lots of ecstasy pills.

The music and crowd made for an amazing atmosphere. Just watch this video if my words are not convincing enough.

At one point during the night, the MC collects a mix of 20 people and stops the music. Each person is individually forced on stage and the MC forces each to put on a show. Some strip down to their panties and bra to perform the type of dance one expects in a go-go bar.

Can you imagine normal people willingly choosing to do this in front of a few thousand strangers?

My two favorite performances consisted of an awkward Irish guy forcefully grabbing the microphone from the MC to rap. In the middle of it all he falls flat on his face as he tries out a new dance move he events on the spot.

My second favorite is this cartwheel performance!

One girl from our group also went up.

The end of the night came surprisingly too fast and once again I went back to work, making sure we all get home safely.

I find a few people and tell them to wait next to a nearby building. Two by two I find more people until we are all finally together.

I lead everyone to the drunk food vendors and we all purchase fish on a stick, which turns out to be chicken once we realize we are eating food thats only half cooked.

Just as the last of us come to this realization I grab three taxis and shove everyone inside. These drivers are all asses and refuse to use the taxi meter, hoping to scam another $20 from us.

I won’t have any of this and yell at everyone to jump out so we can find new and honest drivers. The driver stops me and obliges with my demands to use the meter. Fine with me.

Our driver bolts it out of there and the speedometer reads 100 km/hour. The girls in the back seat urge me to tell him to slow down. I yell out, “mas rapido, por favor” and the driver speeds it up. At this point our driver understands the game and the two of us scare the shit out of these four girls for the next 30 minutes of the ride. Two of the girls continue to pop their heads up front and demand that he slow down.

The driver and I make eye contact and laugh some more. He tells me that these girls are beautiful and look even better scared out of their minds. I quickly agree with him!

Back at the hostel everyone thanks me for a great night and tells me that this night goes down as one of the top highlights of their trip. This means a lot to me considering some have been traveling over 6 months already.