Leaving Colombia On A High Note

It´s been a week since I left Colombia and I am still trying to convince myself that it was the right decision to leave and see something new.

This update seems kind of forced as its been so long since i posted. I don´t really remember most of the details now but i´ll try.
After finishing up a week in the sweltering heat with my dad, I flew back to Bogota, the capital city where i first started my trip this and last year. I think Bogota may just be my favorite city anywhere in the world. That may change when i bus to Rio later this week, but for now, Bogota has everything i want. Its the type of place i can walk around each day for hours and stay entertained discovering new parts of the city.
For instance, here is a tank in a parking lot! 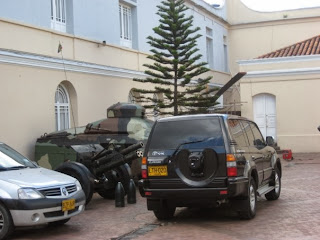 The place i stayed, where i always stay, is my favorite hostel. The staff are so friendly and always treat me well. I´m on a first name basis with the owner, all of the workers, the maid, etc. When i have been sick before, the owner and staff have always been there offering food, water, etc. They refused to let me pay for the laundry they did for me which ended up costing more than a nights stay there.

On tuesday, i met up with a few friends, one of whom i met on my second week of the trip. For the next four days i had a blast seeing new sights and meeting new people. That night myself and two others found the only discoteca bustling on a tuesday. But before that i had one of those great nights in the hostel with excellent conversation.
The next morning myself and two others (a girl from Holland and guy from Australia) set out to visit Colombia´s first wonder of the world: a salt cathedral. We took the Transmileno, Bogota´s subway type bus system, to get there. After an hour of riding through Bogota´s streets we made it to the end of the stop and spent the next 10 minutes getting lost in search of the bus to Zipaquira where the salt cathedral is located. After another 45 minute ride we reached Zipaquira and from there we hiked through the town 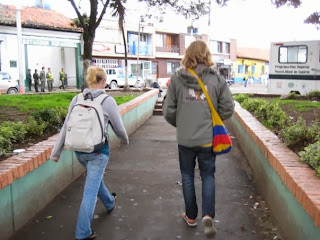 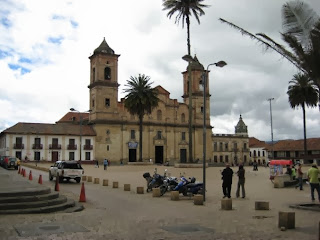 until we reached the entrance. 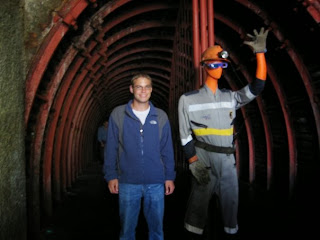 The mine is pretty impressive as you can see. They began the salt mine 400 years ago and eventually converted different parts of it into a cathedral. 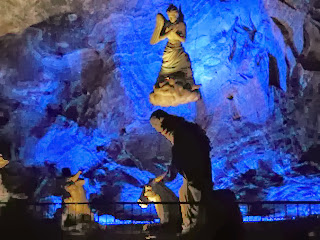 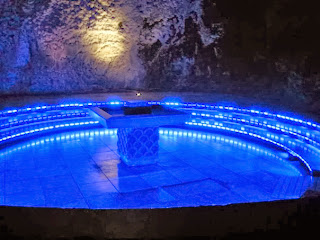 When we returned later that day i met up with everyone from the hostel and together all 20 or so of us marched to one of the clubs for some dancing. 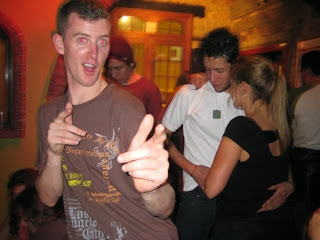 When i eventually woke up the next day i decided to take it easy. A few of us went to a poolhall during the day and got some delicious green tea ice cream from none other than Crepes and Waffles, my favorite restaurant.
But the night turned out awful and i learned that going out in big groups just does not work. The 20 of us once again marched through the streets in search of a discoteca. But this time, we continued walking for a few hours and actually never found one. Instead, we somehow ended up in a really shady part of town with all of the prostitutes who proceeded to grab at us, trying to remove our wallets. We immeadiatly jumped into a taxi and called it a night.
The following night was a bit strange as I ran into a few Colombians i had met last year.
My last night in Colombia was special. A few travelers organized a big party in the hostel with food, drinks, and a show. The show was performed by a Japanese guy who has been working all of the world by performing these Japanese dances. The place was packed and i saw many travelers i had met from different parts of Colombia. 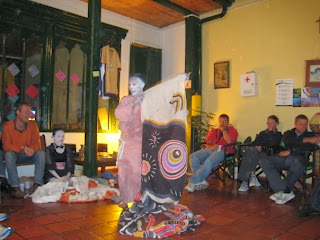 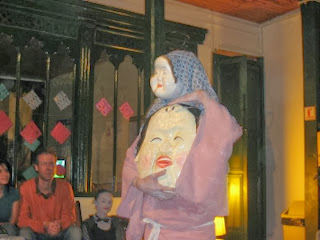 After getting in a at 3am i packed my stuff and headed to the airport for my flight to Lima, Peru. I have been here in Peru for a week now and am leaving for Brazil tonight.