My original plan for Monday was to travel. I have not left Quito for the two weeks I have been abroad but Carnaval means my intended destination, Banos, is fully book. Instead of travel I did the next best thing and changed hostels to the Secret Garden at the opposite end of the city. A tip for all travelers is if you find yourself not liking a place then move to a new hotel or hostel for a completely new perspective of a place. Everything changes. I was not immediately impressed with my new hostel. The streets nearby were empty and the hostel was not as nice I had heard. Dinner on the rooftop terrace changed all of this with amazing views of the entire city.

Shots from the roof during the day 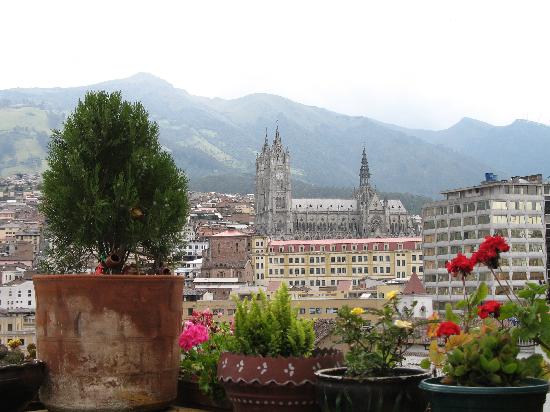 The atmosphere completely changed as a few dozen travelers gathered at a big long series of tables for communal dinner. The food was alright but the sparkling city lights and great people made it perfect. This was a wow moment. At dinner I chatted with a few older Americans for a pleasant conversation about Ecuador and life for them back home where they live in the wilderness to make their rafting hobby possible. After dinner I played Texas Hold’em with two Americans and a Dutch guy. The Dutch guy had never played so it turned into a learning experience for all four of us. The most interesting point in the night was someone from the hostel approaching me to say they I looked familiar. Myself and this guy tried to figure out how for a few minutes until we figured it out. The guy, Paul, had been on my 4 day Salar de Uyuni tour in Bolivia last July.

While I had finished my trip and gone home for 4 months Paul was still on the road. But for now working at the hostel in exchange for room and board. Paul’s birthday was also that night so by midnight Paul phoned a taxi service to call for a bus.

A school bus that is. The school buses here moonlight as taxis so ten of us (the entire staff and a few of us travelers) rode the school bus to La Mariscal to celebrate. We wound up at an Irish bar and there it was a mini reunion of practically everyone I met in my two short weeks in Quito. I ran into Rafael, the 3rd culture kid from Italy, Bolivia, and Argentina. Then later on I ran into the American roommate who thanked me for waking the snoring guy one of my first nights. It’s actually not strange I would run into all these people. We as travelers are not as unique as we think and most of the times will go to the same cities, same hostels, and same discos because we hear they are the best. I was not surprised to see people I thought I might never see again for this reason.