“Stingrays,” or “Another Reason to get Travel Insurance.”

I was snorkeling at Bocas del Toro, Panama when I saw a stingray. A big stingray. It was resting on the bottom of the sea, not even hiding behind corral. It was just chilling at the bottom looking for all the world like the master of its food chain, which, even with us human beings swimming around, it seemed like it was. Sometimes they bury themselves in the sand, and you can only see its eyes protruding from the sea floor. Not this guy. He was proudly on display, his tail, which had to be four feet long and surprisingly thick, swayed gently above him in the current. That’s the kind of thing you hope to see when snorkeling. But not too close. As anyone familiar with the sad death of Steve Irwin knows, those things can be deadly. Although their stings are far more likely to hurt you than kill you, they can put an end to you vacation real quick. That’s what happened to a German couple that our Dutch tour guide told us about after we saw the sting ray. (Travel medical insurance isn’t just for tiny living things, like viruses and bacteria.

to get insured in case you are stung by a giant seafaring monster.) 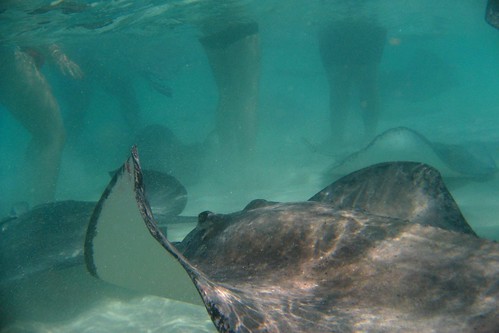 Apparently, our tour guide had been snorkeling in a very shallow area. There was beautiful coral, fish, and sea anemones everywhere, but you had to make yourself as flat as possible because it was only four feet deep or so, and if you hit the coral with your flipper you could damage it. And if you hit a stingray with your flipper, you could damage yourself. Which is what this German woman did. Respecting the corral, and accidently getting a mouthful of water in her snorkel, she looked for a place at the bottom that was only sand to put her foot down. There was a sandy spot, but it was where a stingray was buried and thinking its horrible murderous thoughts. Boom! The stingray ripped her calf open, and blood was immediately in the water. They managed to get her back on the boat and to a hospital. She ended up being okay, but the trip was cut a little short.

I’m so glad the tour guide told us this story after we went snorkeling, and not before.