The Hostel of My Dreams

I have been thinking about opening a hostel. I actually did a little research about what kind of money it would require to open one here in Philadelphia, since there does seem to be a lack of hostels in U.S. cities in general. I had visions of starting an American hostel empire. Then I actually looked at the money (and work) it would require. Needless to say, I don’t have the money or diligent, hardworking nature to pull it off. There’s so many things to worry about, including securing staffing, a location, and payment processing for the hotel industry

So now I’ve just been dreaming about opening a hostel. And since I’ve firmly established the future in which I lay back and let people run a hostel for me in the “I own the Philadelphia 76ers and hang out with Mark Cuban” dream world, I can now build the hostel I really want. 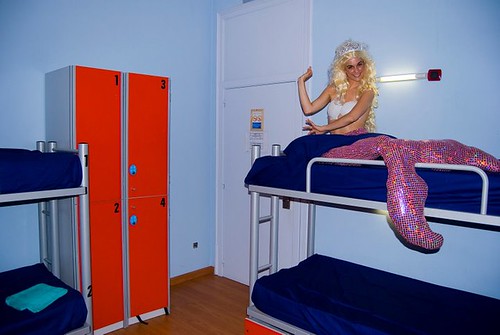 My ideal hostel would be on a tropical beach, away from a tourist area. I don’t mean near a beach, I mean ON a beach. There would be hammocks hanging from palm trees that you could lay on and read while you felt the air come off the ocean. There would be a kitchen constantly stocked with fresh tropical fruit delivered everyday by a lovely middle aged woman who I would talk to in Spanish and complain about the tourists. There would also be a pool outside which would have a swim up bar that I would open during special occasions. There would also be a bar inside, with a patio overlooking the beach. Occasionally I would get a local reggae band to come and play gigs. I would also find a way to have an NBA package to watch Sixers’ games. I would have surfboards, snorkeling equipment, and bicycles for rent. I would also have an open air game room with a pool table and foosball table. Did I mention that this would be within a short hike to a national park?

In the hostel itself I would have a huge library of books in different languages which would run on a leave-a-book-take-a-book policy. There would be a TV and a DVD collection, but it would only be usable on rainy days. There would be single and dorm style rooms. There would be a rooftop patio with a barbecue area. We would hang at white sheet up there an project movies from time to time. All the staff would be friendly and beautiful and female. They would flirt with me but I would resist their advances because I am so professional. Also, I would have a pet monkey that sat on my shoulder and occasionally brought me things, like beer. It would also all be eco-friendly and run off of solar panels, and wind turbines, or something. Maybe there’s a gym there too. And a brewery! And a hookah bar!

And of course they would shoot the newest swimsuit issue on my beach, and the models would all stay with in my hostel. They would flirt with me as well, but since they don’t work for me I might succumb to their advances.

And while I’m dreaming I’d like a private jet. And a pony. A unicorn pony.