Top Places to Shop in Edinburgh

, the city of Edinburgh was voted the most desirable city to live in the UK in a 2009 poll by YouGov. If you are a shopaholic travelling to this city, then be prepared to succumb to your addiction. The range of shopping places is wide and eclectic. You will easily find ample chain stores that a tourist would expect to see in any ultra modern capital of the world, along with several lesser known independent gems that are worth seeking out. Here’s a look at a few main shopping areas along with more some peculiar and lesser known stores. 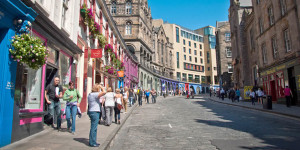 This traditional store of the city is associated for its pride for Scottish culture. The owner of the store Howie Nicholsby had launched a design in the London Fashion Week in 1999 that only features cutting edge kilts. Since then its popularity among the locals and even top celebrities, including Alan Cumming and Vin Diesel, who have proudly sported the kilts at major events, has only risen. Today, the store features camouflage, leather and pinstripe kilts, traditional products and shades, and has a turned into revolutionary day to day wear for locals. They can be easily paired with kilt suits, waistcoats and sporrans, and account for traditional Scottish attire. What’s more is that these products are not only available for men but even for women and kids. Opening timings are 10 am to 6 pm on most days and the rush starts to build up towards the latter half of the day. A good idea for tourists is to stay at a hotel in close proximity, such as Piries Hotel Central Edinburgh, while on their shopping breaks in Edinburgh

The largest shopping centre in Edinburgh, the Ocean Terminal, has close to 60 shops, a spa, a gym, lots of cafes and restaurants, and even the popular tourist attraction, the Royal Yacht Britannia. If you are staying in the centre of the city, then reaching this place is easy. Just a short taxi or bus ride from the centre will take you right to the terminal, where you will find ample parking room. This place was built since it was part of the Leith’s industrial docklands regeneration. This is a lesser known part of the city and tends to be a lot quieter than other major malls in the capital.

If budget is not your concern, visiting the Crombie in 60 George Street is a must. This chic, urban and sophisticated store has a lot of designer wear for both men and women. Started in 1805, its range of clothes includes office wear for men and women, along with classic and contemporary menswear and beautifully crafted women’s coats. There is even an abundance of stylish and branded accessories, such as cravats, cummerbunds and silk scarves. Not to mention, the staff at the store will treat you like a proper dandy. For those on shopping breaks in Edinburgh, this store is a must visit.