Whimsy and Romance in Prague

Prague has a crazy blend of Roman, Gothic, Renaissance, Barogue, Art Nouveau, Cubist, and Modern architecture, in part because it’s one of the few cities in central Europe that wasn’t leveled during World War II. Also because it is a weird, arty, and counterculture heavy city. Let’s not forget the Prague Spring was the first real rebuke of Russian policies in a Soviet state. Which is why it was quickly squashed by the Red Army.

.  It’s is a city that is very whimsical, and yet romantic. For a fantastic example of Prague’s whimsy, take a look at the dancing house. 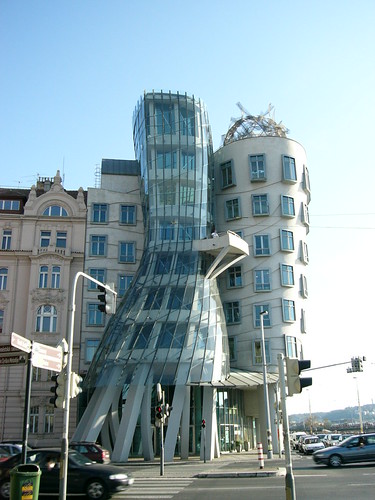 Every monument or statue seems to have a great story behind it. One of my favorites is the story of the St. Vitus cathedral. St. Vitus’s tomb is there, and he deserves to be honored, because he was one of the first people to die to preserve the integrity of the patient-therapist relationship.

Construction on the cathedral where St. Vitus is buried began in 1344. While it was being built, King Wenceslas IV began to think his queen was sleeping around. He brought the priest who listened to her confessions, John of Nepomuk, before him. He demanded the priest tell him what she said during her confessions. John refused, citing church code and its precedence over kingly decrees. The king made John put on heavy armor and go swimming in the Vltava River. John was canonized, and became St. Vitus. Nobody ever seems to ask the obvious question though, which is: ” what if John refused to say because he was the one sleeping with the queen?” It’s actually kind of more romantic that way, and more in line with what we expect from medieval priests.

So go to Prague and have your own whimsical and romantic adventure. Just don’t sleep with the queen.